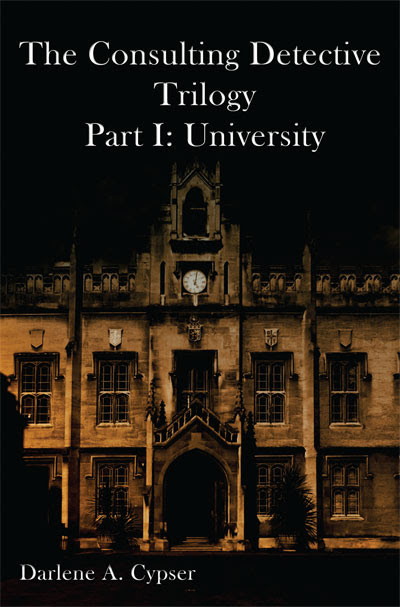 My review of Darlene Cypser's next book about the early years of Sherlock Holmes.

One thing bugged me about that segment.  Holmes and his father sit down and discuss Sherlock's schooling, the future, and other things, and it's simply covered in a paragraph indicating the conversation took place before Sherlock has to be helped back to his room because he's still weak from the fever that took him at the end of the last one.  I wish that the conversation had been shown.  I'd have liked to know what they said to one another.

Grammatically, there were a couple mistakes, including another one of those extra word sentences that were so common in the pre-release version of the first one.  I only noticed one instance of that, I believe on page 91, though.  Other than that, I realize that the book is told in third person and so use of 'he' would make things very confusing considering that most of the characters mentioned are men, but at the same time, the usage of the characters' names is overdone at times.  I think things would read more smoothly if, instead of using their names all the times, Ms Cypser would use "the eldest Holmes brother," or "the young detective," or "the esteemed doctor," or something like those examples that indicates who the person is without constantly using their name.  I don't have the book in front of me so I can't quote specific examples right now, but an ad-lib example is something like: 'Sherlock and Sherrinford ascended the stairs and entered Sherlock's room.  Sherlock turned around and faced Sherrinford.  "Blah, blah, blah, dialogue," said Sherlock.  Sherrinford sighed.  He knew what Sherlock meant, however, Sherrinford also . . . '

Again, not an actual quote from the book, but a close enough facsimile for what I mean.  It does detract from the book slightly, but it's a rather small complaint, all in all.

Now, the things I love about this book: She brings us from Sherlock's journey as a young man going through a terrible ordeal, to a man who has such passion for what he wants to become.  In the first book, and the beginning of this one, we see much more of Sherlock's thoughts and mindsets and how he comes to the conclusions he does.  In the second half of this one, however, we're introduced to the start of the calculating detective who only reveals the thoughts he wishes to show and keeps everything else inward.  Again, the book isn't in front of me, but I realized that when he was having a conversation with one character and his responses consisted of the word "Yes."  I realized then that the other person was giving away information, filling up the space in the conversation, and Sherlock was merely sitting there, absorbing.  And I loved it.

I don't doubt I'll come back with more to say about this, but here's my review so far.  All in all, five out of five stars.  All Holmes fans should read this book.
Posted by Kate at 4:47 AM

Kate
I'm a Sherlock Holmes fan whose Holmes novels, Rendezvous at the Populaire and I Will Find the Answer, are available for purchase from barnesandnoble.com and amazon.com